Valves and equipment since 1909. 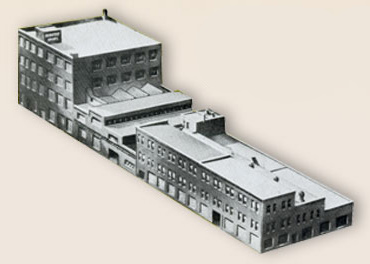 Here, at our original manufacturing plant, the first commercial oxygen-acetylene welding work was performed west of the Allegheny Mountains.

No, we didn’t make them. But these words do accurately describe the super heavy, hard to transport valves manufactured primarily for use in oil fields worldwide at the beginning of the twentieth century. Taken from the book, Men and Women of Wartime Pittsburgh, a historical perspective saluting the people and facilities that made the then great industrial center a vital manufacturing center as well, the book also creates the backdrop for the coming of age of a young, vibrant company called:

That was our first name, given to us at birth in 1909 to reflect our primary business; the brazing and welding of broken castings, plus general machine work. Our headquarters and plant were on Pittsburgh’s Liberty Avenue where our company’s progressive personality was first nurtured.

In 1917, with World War I coming to a close, our machining and fabricating capability worked to create the first cast steel gate valve for high pressure service. The days of the “large, cumbersome cast iron valves” were now history and these new, stronger, lighter, high pressure valves would soon be providing reliable flow in every producing oil field in the world. In just a few short years, a brazing company in the heart of Pittsburgh had grown to be a valued manufacturer whose products spanned the globe.

In 1927, with the continued growth of our gate valve production and the exclusive use of kerosene as the high pressure testing solution for valves, we changed our name to Kerotest – meaning, of course, kerosene-tested. And that new name became a world-wide standard for oil field valves.

Kerotest drafted for the war effort.

“There are two indispensable factors in victorious warfare in our times. The first is the willingness of brave fighting men to give their lives to an exalted cause. The second is a clear understanding among those who direct, and those who man, our industries that without a sincere devotion to that cause, from one end of the production line to the other, the men on the fighting line are betrayed.”

When America entered World War II, the War Production Board enlisted Kerotest to devote our entire capacity to making the steel valves that were vital in ship construction. The order made sense because since 1914, we had been producing forged brass valves that in peacetime were used by commercial gas companies and chemical plants nationwide. During World War I they were used to regulate oxygen, hydrogen, acetylene and other gases for many uses that included oxygen masks, observation balloons, and torches. With this proven track record, we went to work via support of our country’s World War II efforts.

In the late 1920’s, electric refrigeration and air conditioning brought about the development of a complete line of Kerotest forged brass, bronze and steel valves.

Historians agree that without the U.S., Hitler’s maniacal vision may have become a reality. It took a nation working together to stop him. For our part, we procured more land, bought more machine tools, extended our plant on Liberty Avenue by several city blocks and subsequently increased manufacturing capacity by 400%.

Times change, but the patriotic call to duty remains the same: Do your part and do no less. Kerotest was honored to support the war effort and, in return, the U.S. Maritime Commission honored us with the Merit Award of the Victory Fleet Flag and the Maritime “M” Pennant. We received this honor once in 1942 and twice in 1943. By the end of the war, less than 5% of all suppliers to the Maritime commission had received the award a single time.

Our valves have contributed to increased flow capacity worldwide, but no effort has made us more proud than serving our country.

Following World War ll, we worked to rebuild and grow our customer base by going back to our roots. We re-established ourselves as a leading supplier of valves to the refrigeration industry and quickly re-emerged as the largest cylinder valve supplier for hazardous gases in the country. And we continued as a major global supplier of cast steel valves for the oil industry.

In an innovative environment, good valve engineering can transcend industries. So in the late 1950’s when the nuclear industry was emerging, we took our proven leak-free metal diaphragm valve technology and applied it as a welcome solution for a whole new base of Kerotest nuclear customers.

In the early 1960’s, we worked with a major utility company in the eastern U.S. to develop a replacement for the old plug valve. Applying our cast steel valve technology, we introduced the Model 1 in 1963. It was the first steel gate valve designed specifically for the natural gas industry.

Applying our knowledge and lessons learned is a hallmark of our history and our commitment to the emerging energy markets of the future.

Making a big bang in nuclear.

By the early 1970’s, we had grown to be a strong competitor and trusted supplier to the nuclear industry and in 1971 we earned the ASME N Stamp. That year, we also introduced the first packless metal diaphragm valve for nuclear service and eventually supplied over 100 nuclear power plants worldwide.

This, along with our continued growth in the world’s oil fields, resulted in the U.S. Secretary of Commerceawarding Kerotest the president’s “E” certificate for exports, citing, “…outstanding efforts to the Export Expansion Program of the United States of America.”

Throughout the 1970’s, our work in supplying valves to the nuclear industry was the primary factor in quadrupling our production. And in 1980, the Department of Energy chose Kerotest to manufacture specialty valves for the Uranium Enrichment Program as part of an ongoing effort to rebuild America’s nuclear industrial manufacturing base.

ESOP is not a fable.

his is a true story that began in 1983 with an event that would change us forever. And ensure that we would not only live to be a hundred, but would have a dedicated workforce to take us into our second century of manufacturing productivity and engineering creativity. At that time we were owned by a large conglomerate looking to divest the business. Instead, our employees got together and, with crucial backing from a major Pittsburgh bank, bought the company. And on that day, Kerotest forever more became an employee-owned, ESOP (Employee Stock Ownership Plan) company. What has that meant to us over the years?

“It means we’re here to stay. Committed to our company and our customers. Everyone here is a shareholder who has a personal stake in the company. Our employees don’t work for uncaring bosses interested only in big bonuses. We all work for a company we own. So customer service isn’t just talk, it’s a mandate we’re all happy to share. 100 Years? That’s just a good start for an ESOP company.”

Gas has and always will be a natural for us.

Our history is testament to our commitment to the natural gas industry. The Model 1 was just the beginning. In 1985, we introduced electrofusion technology to the natural gas market. In 1987, Kerotest was the first approved polyethylene valve supplier to British Gas (now National Grid). A year later, we offered the all-welded steel ball valve line – the ANSI Class 150 Weldball.

Then in 1989, primarily to increase our commitment to this market, we opened our second manufacturing facility in Mansura, Louisiana where we would invest almost $5 million in new technology. And in 1991, to ensure a consistently high level of product and service in our plants, engineering departments and administration, we adopted the Total Quality Management philosophy. Two years later in 1993 we celebrated 30 years of continuous service for the Model-1. Then in 1994, we introduced the ANSI Class 300 Weldball, an expansion of the popular all-welded steel ball valve design. Another first was introduced in 1994 with the Charlotte Universal Electrofusion Control Box.

Today, we sell valves to literally every gas company in the U.S. Natural gas is part of our history and will be a big part of our future.

A city wanted us to stay. We’re glad we did.

In 1995, we were faced with a tough decision. Our manufacturing facility in Pittsburgh’s Strip District needed expensive upgrades and while it would be tough to leave our home of 86-years, it would be far more cost-effective to relocate to our other manufacturing facility in Louisiana. But this employee-owned company again took charge of its destiny and contacted the offices of then new Pittsburgh mayor, Tom Murphy. He wanted us to stay, too, and with the help of $7 million in low-interest loans, we moved into a new, state-of-the-art manufacturing plant and office complex in the Hazelwood section of Pittsburgh.

The City of Pittsburgh worked with Kerotest, enabling us to stay in the area, relocating to new facilities in Hazelwood.

In 1998, Kerotest invented, patented and introduced the first cordless, battery powered electrofusion control box – the Portafuse – to the natural gas industry. Followed a year later by the full-port introduction to the Weldball® valve line. Then in 2000, we expanded our Needle and Gauge valve product line with the acquisition of Marsh-Bellofram Instrument Valves.

But perhaps our most significant offering during this period was the introduction of the POLYBALL® Polyethylene Ball Valve in 2003. A year earlier we had invested millions in our Mansura, Louisiana plant to support this new line of corrosion and maintenance-free valves and the result was a ½” to 12” standard and full port product line with the industry’s first full forward and backward traceability.

We have so much energy to offer the future.

We will always be an ESOP company, so we will always have a personal stake in a future that is tied directly to our planet. Wherever energy flows, we will be there. In district energy systems that reduce emissions of greenhouse gases, air pollutants and ozone-depleting refrigerants. In the oil and gas drilling fields. In the nuclear fuel markets. In the natural gas distribution industries. We will be there. With the same engineering passion and commitment that built the company.

The boundless energy of a company owned by its people. That will always define Kerotest Manufacturing Corporation.

Know what you want?

Off-the-shelf or built-to-order, get in touch and we’ll go to work for you today.

Here’s where you’ll find Kerotest product and technical information. From individual valve and accessory sheets to full line catalogs and more. All yours for the taking.